Episode 4 Recap is now up!
Just a short recap of Conan tonight; I have too much stuff to do!. Tonight marks the 3rd episode of the triumphant return of Coco and features Jon Ham of Mad Men, Charlene Yi of kookys-ville, and a musical performance by Fistful of Mercy (make sure you emphasize Tom Morello at every opportunity!!!! :P). Conan’s ratings have been doing quite well, I have yet to check how they are doing as a lead-in for Lopez, but will do that soon. Episode 2 Recap link. Episode 1 Recap link.

Conan started right off with some crowd interaction which played for some repeated laughs through the show.  As I’ve said his kinship with his audience and the ability to interact directly with them without any barriers will, and should be, a consistent part of his show.  His fans after-all are what have made this possible as he himself has noted.  He did a rather straight monologue this evening.  IMHO the best joke being that as he was on TBS the show should have Tyler Perry in the title.

The first sketch portion this evening was a brief list of alternate show names they supposedly threw around before settling on Conan.  The “C” Word  probably drew the biggest laugh. After a break they introduced Ted Turner played by MacGruber himself, Will Forte sitting atop a stuffed buffalo on wheels.  This skit was good for a few chuckles but underwhelming overall. 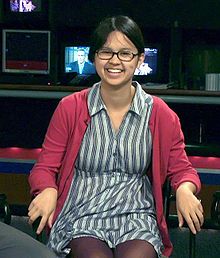 Jon Hamm was the main guest this evening.  It’s kind of ridiculous how handsome this man is.  It would be terribly easy to hate him if it weren’t for the fact that his is a) extremely humble and b) extremely funny.  Reference his appearances on Kevin Pollak’s chat show or Saturday Night Live for reference.  My favorite comedic bit he has performed would be the Sergio skit from SNL featuring Hamm as the greasy sax player inspired by The Lost Boys.

Conan and Hamm discussed the merits of Mad Men moving into big ties and plaid as they approached the 70’s and Jon quipped that he would walk out of the show before that happened.  Charlene Yi was the second guest and she is a strange bird, but that’s OK.  She has a certain charm about here and Conan obviously enjoys her sense of humor.

Ok, unknowns is obviously a stretch, but I didn’t really know who most of these guys were apart from Morello in the musical act Fistful of Mercy.  I watched the one guy thinking he looked like a young George Harrison… surprise! He’s Dhani, George’s son.  I know a little of Ben Harper’s music, but I was unfamiliar with Joseph Arthur completely.  All of that is irrelevant of course as I enjoyed the performance.  It had a southern rock feel to it, apart from the obivous Morello parts.  He’s a great guitarist but he relies on the “Morello” sound too much.

Hmmm… not so short of a recap after-all.  Well that is the weakest of the shows thus far, but that doesn’t really suggest anything.  It was still good, and Hamm is a great interview. Conan consistently features excellent musical acts. Michael Cera is on tap for tomorrow.

Conan Returns on TBS – A Recap